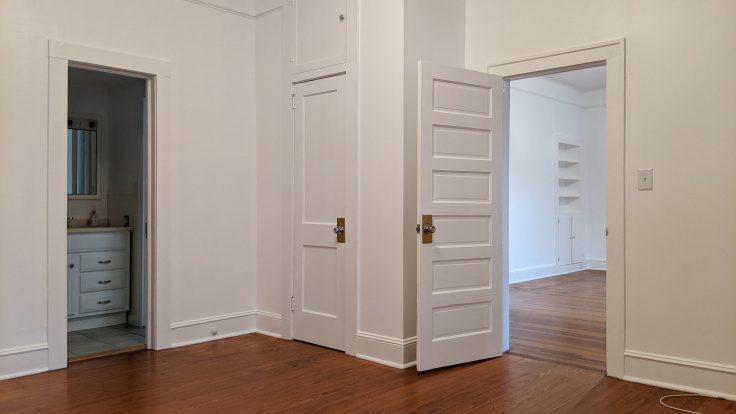 I promised you some Mulberry House updates without realizing that it’s the end of the year and nobody actually works these last couple of weeks (even if they go to work and get paid, unless they’re service / hospitality people). So in order to keep my promise while being as lazy as possible, I’m going to share the bedroom updates even though that was the very last room I started on and finished!

So here are some before pictures to refresh your memory:

It’s quite a pretty blue color, really. But I was envisioning something a little more boring.

Getting rid of that chair and curtains made the house smell a million times better.

Don’t you just love the rolling ceiling painted in several shades of white (and yes, half of that door frame is a different colour).

And here are the after pictures. Basically all I did in the bedroom was clean, prep to paint, and paint. Which is not nothing. I’m currently being treated for trigger finger, presumably because of the amount of caulk I went through in this room alone.

The coloring in this first picture is actually pretty true to life. The next one not so much because I took these pictures at the worst possible time of day, so use your imagination and envision all of the walls, trim, and ceiling being covered with different sheens of Behr’s Ultra Pure White paint.

I had wanted to do something interesting with the ceiling to hide some of the bulges and seams, but that was something that didn’t fit into the timeline. Maybe I’ll add some planks to the ceiling whenever phase two happens.

I’m going to be honest, the paint made a huge difference, especially on the ceiling, which still looks a little iffy, but somehow so much better.

Oh, and I added a new light fixture. Isn’t it cute? Andrew picked it out because he thinks it looks like a donut.

So that’s it. If you feel so incredibly inspired by my brave paint choices, here are all the details and sources:

If you have a few days off, enjoy them and I’ll see you soon!