Our appliances came in this week. We are starting from scratch and needed all new appliances so we’re getting them all matching, from the same line. Because we can.

We chose the GE State line because they have look similar to stainless but work with magnets which, let’s face it, is more important than the look. Function first. So please send all of your children’s drawings so we can decorate our fridge.

Anyway, we ordered them online. The order confirmation and follow up emails all said they would be delivered March 13th and that they would call the day before to give us a two hour delivery window. Ok. Except that for some reason the credit charge never showed up. But I was willing to let Lowe’s buy us some appliances if that was the problem. Sadly they figured it out a few days before delivery and called to process the payment. And then March 13th comes and we still haven’t gotten a call about a delivery window. So Andrew calls them around 9:30 am. And they say the delivery window is 9am – 11am. Okay. So Andrew heads over to the house to wait for the delivery. Sometime near 11am they call to say that actually the delivery window is 12pm-2pm. Great. And Andrew has a meeting at work at that time so can’t stay. But luckily the contractor and his team was doing some work at the house that day and they offered to accept the delivery. They said they do it often and always inspect everything for damage. And that Lowe’s never delivers anything without damage.

Later that afternoon we get a text from our contractor saying, “the appliances were delivered and nothing is damaged!” Yay!

I swung by the house after work and check out the appliance and sure enough, nothing appears to be scratched or dented or damaged in any way. Seriously shocking but yay!

And then Andrew swung by the house after he got off work. And noticed that the range was stainless steel. Undamaged, but stainless steel. See how you can see your reflection in the warming drawer but not in the front of the fridge? That’s because the range isn’t Slate. So Andrew called Lowe’s and they said they would have a manager call him back withing 24 hours. Of course that never happened but when he called them again, he was able to talk to someone who promised to arrange an exchange for the right range in 10-14 days. We’ll keep you posted on what happens with that well laid plan.

But we did get a tankless water heater installed this week.

And an air conditioning unit with fancy metal surround.

And base shoe molding. This was actually pretty exciting for me because we had super simple base board with all straight edges and right angles. And then they installed the floors and I came to accept that fact that we would need quarter round to fill in gaps where the hardwoods weren’t quite able to hide under the baseboards. And I really didn’t want to add a round shape to our nice straight edges. But then we ran into a neighbor last week who hadn’t seen the house for a while so we gave him a tour and out of the blue, he suggested square base molding. I immediately liked the idea but couldn’t picture it so he invited us over to his place to check it out and I loved it. So we got it. Great story.

There was also a little more work done in the bathrooms this week too. The double shower heads were installed in the master shower and the guest bathroom vanity got installed. 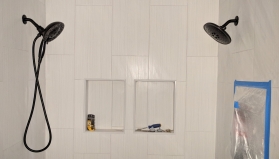 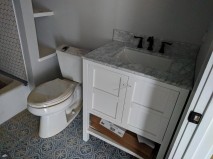 And check out the kitchen sink and faucet! Andrew’s gonna be able to wash so many dishes! 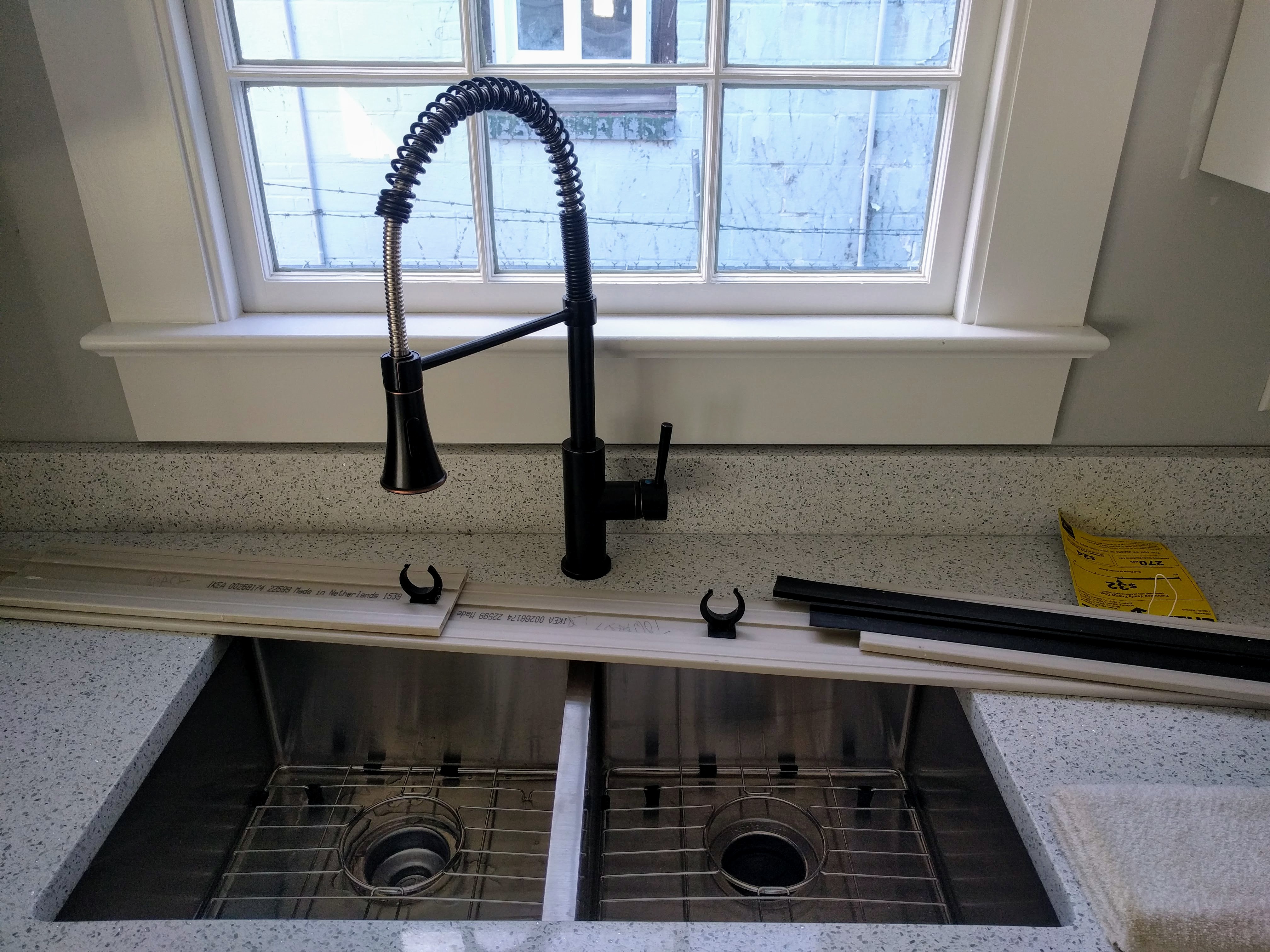 Have I mentioned how much I love these floors?

All of the light fixtures went in this week too. With lights and plumbing it’s really feeling like a place where humans could live. The lights above the master vanity are going to be flipped upside down, there will be pretty globe bulbs in the dining room fixture, and I’m surprised how much I like the entryway light, given how hard it was to fine one that I thought would fit the overall look of the house, but still give us a little sparkle. I’ll have to try to take some pictures with it in action. 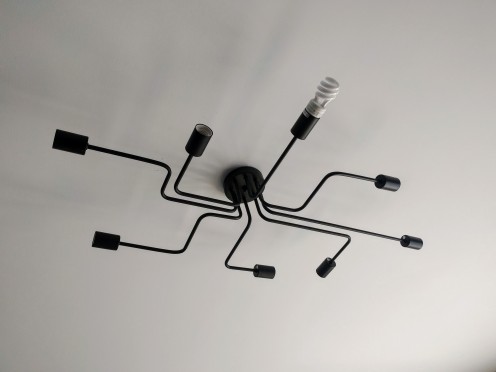 The appliances (other than the range) got installed. Searing steak with a range hood should hopefully be a little less likely to set off the smoke detector.

The island was another bit of house drama. I had designed the kitchen with 4 feet between the island and the outer cabinets to allow for plenty of room for several people to be in the kitchen. Because I’m such a good host and when I have people over for a dinner party, I expect them to do their own cooking. But unfortunately the contractor decided that 3 feet was a normal amount of space and make a cutout in the floor for an HVAC vent and wired for island pendant lights with that in mind. So when the island got put in, the floor vent was in the middle of the room, rather than along the edge of the island, and the pendants hung over the walkway between the island and the cabinets. We decided to move the island 6 inches back, leaving us with 3.5 feet of walkway, so that the floor vent would sit along the edge of the island and the pendants would hang above the front edge of the island. I still can’t decide if I’m okay with where the pendants are hanging or if we should try to get them moved or if we should try to swag them so they are centered above the island.

Cabinet knobs and light switch and outlet covers got added at the end of the week. Apparently the ghetto looking one will be replaced but this version should be enough to pass the final build inspection. Also, apparently dishwashers need to be connected to a light switch? 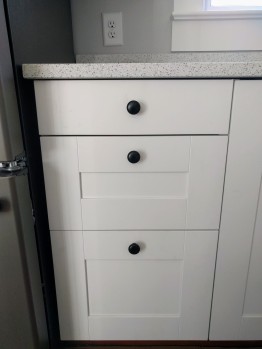 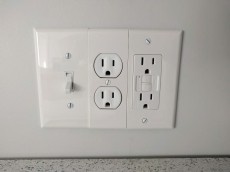 And finally, a little more progress has been made on the deck.

Reservation requests are stating to pile up so you should probably start planning your visit soon!

2 responses to “Getting Closer”